The Fixer: The Fixer 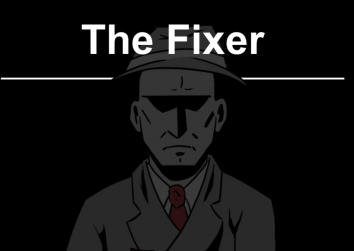 Bad news, you’re still down at the station spinning fairy floss with the Johns when all those loose ends you left behind start unravelling like bloody paper trails and before you know it, wham, bam slam, you’re inside counting flies in your food and the empty echo of the lock-up clock, tick-tock, tick-tock…Bye bye kid.

The Fixer is an atmospheric noir thriller game, where players are sent out to ‘repair’ a mob job gone wrong.

Can you hide all the evidence and make a compelling alibi before the cops arrive?

I helped out on this one.  This game was largely the brainchild of Rhys Davies, the designer, original writer, and all things noir officionado and Bryn Findlay-Dykes, the programmer.  I joined in at The Arcade Vaults in Cardiff, UK during the 2020 Global Game Jam to polish some of the script (It didn’t need much, Rhys had the lingo down!) and also suggest a few additions – like female and possibly trans characters.   Cheers to the entire team for this deep, dark cool effort.

To see more have a look at the Rhys & Bryn’s Game Jam presentation video, 23 mins in: